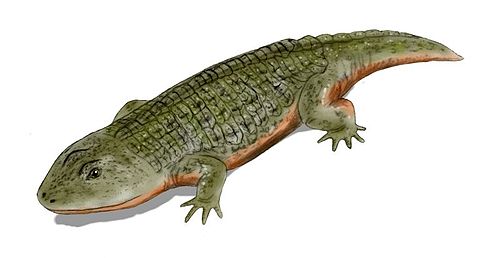 Peltobatrachus (from Greek pelte, meaning shield and batrakhos, meaning frog) is an extinct genus of temnospondyl amphibian from the late Permian period of Tanzania.

Peltobatrachus was a large, slow moving animal, up to 70 centimetres (2.3 ft) in length. It was a fully terrestrial amphibian, only returning to the water to lay its eggs.

To protect itself against predators such as the large gorgonopsid therapsids, it had developed an armadillo-like armored plating covering its body and tail. The armor consisted of broad plates on the shoulders and hips and narrower plates on the rest of the body. Although no teeth of the creature have been found, it probably fed on insects, worms, and snails.