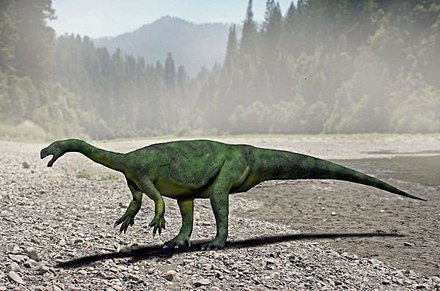 Aardonyx (Afrikaans aard, "earth" + Greek onux, "nail, claw") is a genus of prosauropod dinosaur. It is known from the type species Aardonyx celestae found from the Lower Jurassic Elliot Formation of South Africa. A. celestae was named after Celeste Yates, who prepared much of the first known fossil material of the species. It has arm features that are intermediate between prosauropods and sauropods.

Based on the structure of the hind limbs and pelvic girdle of Aardonyx, the dinosaur normally moved bipedally but could drop to quadrupedal movement similar to Iguanodon. It shares some attributes with giant quadrupedal sauropods like Apatosaurus. Australian paleontologist Adam Yates and his team's discovery of the genus was published online before print in Proceedings of the Royal Society B in November 2009, and was scheduled to appear in the March 2010 issue. British paleontologist Paul Barrett of the Natural History Museum, London, who was not involved in the research, commented that the discovery of Aardonyx "helps to fill a marked gap in our knowledge of sauropod evolution, showing how a primarily two-legged animal could start to acquire the specific features necessary for a life spent on all-fours".

According to Dr. Matthew Bonnan, a co-author on the study, "We already knew that the earliest sauropods and near-sauropods would be bipeds. What Aardonyx shows us, however, is that walking quadrupedally and bearing weight on the inside of the foot is a trend that started very early in these dinosaurs, much earlier than previously hypothesized." Bonnan adds, "On a scientific level, it's really fulfilling to have a hypothesis on how you think dinosaurs got large, then to test that in the field and get back these kind of data -- a new dinosaur -- that really does start to fill in some of those anatomical gaps."