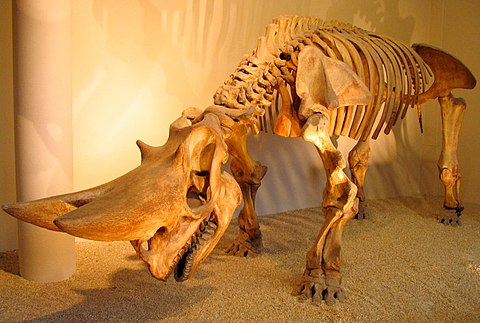 Arsinoitherium is an extinct genus of paenungulate mammal belonging to the extinct order Embrithopoda. It is related to elephants, sirenians, hyraxes and the extinct desmostylians. Arsinoitheres were superficially rhinoceros-like herbivores that lived during the late Eocene and the early Oligocene of northern Africa from 36 to 30 million years ago, in areas of tropical rainforest and at the margin of mangrove swamps. A species described in 2004, A. giganteum, lived in Ethiopia about 27 million years ago.