ARTHROLYCOSA
(ar-froe-lie-ko-sah)
meaning: "Jointed Lycosa - a reference to a genus of wolf spider" 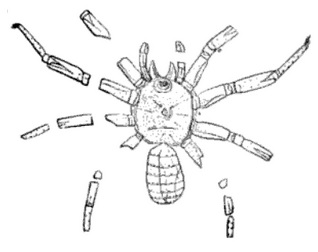 Arthrolycosa (meaning wolf [spider] with joints) is an extinct genus of arachnids, possibly spiders, that lived about 300-250 million years ago.

Fossils have been found Mazon Creek USA and in the Kirov Oblast region of Russia.

Species of Arthrolycosa are estimated to have grown to a length of 2 inches (5 centimeters) and may have preyed upon insects and other smaller animals that lived alongside them.