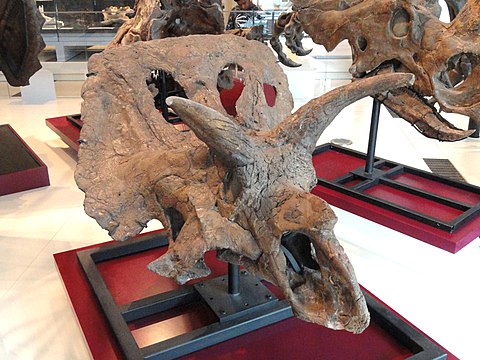 Arrhinoceratops (meaning "no nose-horn face", derived from the Ancient Greek "a-/a-" "no", rhis/Ris "nose" "keras/keras" "horn", "-ops/ops" "face") is a genus of herbivorous ceratopsian dinosaur. The name was coined as its original describer concluded it was special because the nose-horn was not a separate bone, however further analysis revealed this was based on a misunderstanding. It lived during the latest Campanian/earliest Maastrichtian stage of the Late Cretaceous, predating its famous relative Triceratops by a few million years, although it was contemporary with Anchiceratops. Its remains have been found in Canada.