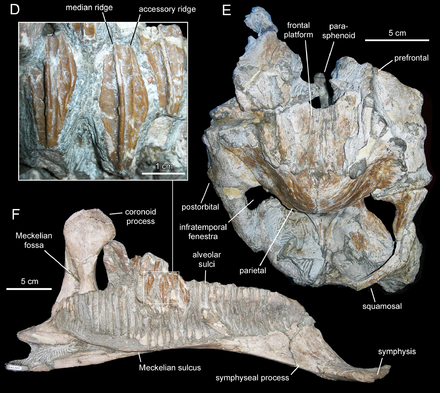 Arenysaurus is a genus of hadrosaurid dinosaur from the Late Cretaceous (66 million years ago). It is known from a partial skull and skeleton found in late Maastrichtian-age rocks of the Pyrenees Mountains in Spain. The type species is A. ardevoli, described in 2009 by Pereda-Suberbiola et al., a group of researchers from Spain. The genus name refers to Aren, where it was found, and the specific epithet honours geologist Lluis Ardevol. The estimated body length of Arenysaurus is 5 to 6 metres (16 to 20 ft). Arenyosaurus was a lambeosaurine, a member of the hadrosaurid subfamily with hollow cranial crests. Arenysaurus is one of the most complete and best dated ever found in the Late Cretaceous period.

Arenysaurus was found in a small village (350 inhabitants) in the Aragonese Pyrenees called Aren (Areny in Catalan). The townspeople of Areny worked day and night helping the paleontologists. For this reason the paleontologists dedicated the dig site to Areny. The original bones can be seen in a museum that was built in the town. The museum also houses reconstructions and videos of the dig. An exact replica has been constructed of the bones from where the Arenysaurus fossils were found in the very position which they were found.