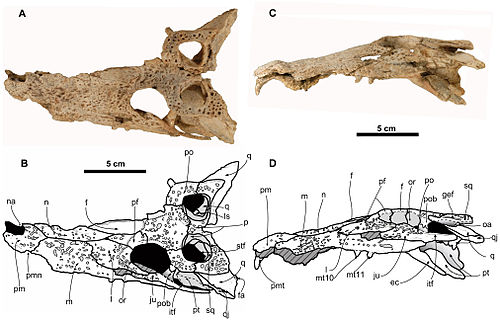 Arenysuchus (meaning "Aren crocodile") is an extinct genus of crocodyloid from Late Cretaceous (late Maastrichtian stage) deposits of north Spain. It is known from the holotype MPZ ELI-1, a partial skull from Elias site, and from the referred material MPZ2010/948, MPZ2010/949, MPZ2010/950 and MPZ2010/951, four teeth from Blasi 2 site. It was found by the researchers Jose Manuel Gasca and Ainara Badiola from the Tremp Formation, in Aren of Huesca, Spain. It was first named by Eduardo Puertolas, Jose I. Canudo and Penelope Cruzado-Caballero in 2011 and the type species is Arenysuchus gascabadiolorum. The generic name refers to the finding site, and "suchus", from Greek meaning crocodile. The specific name honours the researchers who discovered the holotype.