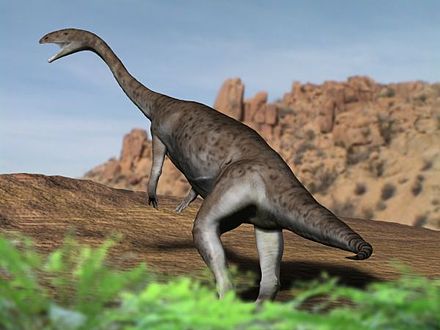 Anchisaurus is a type of early sauropodomorph dinosaur. It lived during the Early Jurassic Period, and its fossils have been found in the red sandstone of the Portland Formation, which was deposited from the Hettangian age into the Sinemurian age, between about 200 and 195 million years ago. Until recently it was classed as a member of Prosauropoda. The genus name Anchisaurus comes from the Greek agkhi/agkhi anchi-; "near, close" + Greek sauros/sauros; "lizard". Anchisaurus was coined as a replacement name for "Amphisaurus", which was itself a replacement name for Hitchcock's "Megadactylus", both of which had already been used for other animals.