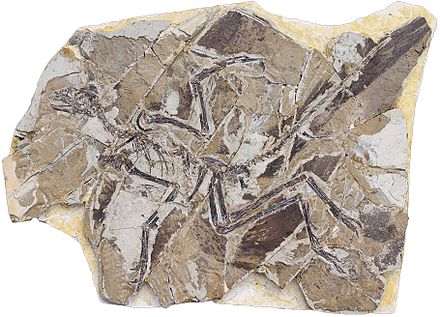 Anchiornis is a type of small, four-winged paravian dinosaur. The genus Anchiornis contains only the type species Anchiornis huxleyi, which means "Huxley's nearby bird", in reference to its similarity to modern birds. Anchiornis fossils have been only found in the Liaoning Province of China, in rocks dated to the late Jurassic period, about 160 million years ago. Anchiornis is known from hundreds of specimens, and given the exquisite preservation of some of these fossils, it became the first Mesozoic dinosaur species for which almost the entire life appearance could be determined, and an important source of information on the early evolution of birds.