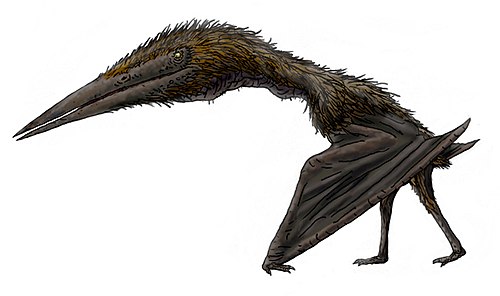 Aerotitan is a genus of large azhdarchid pterosaur known from the Late Cretaceous of Patagonia, Argentina.

The type species Aerotitan sudamericanus was in 2012 named and described by Fernando Emilio Novas, Martin Kundrat, Federico Agnolina, Martin Ezcurra, Per Erik Ahlberg, Marcelo Isasi, Alberto Arriagada and Pablo Chafrat. The generic name is derived from Greek aer, aer, "air", and Titan in reference to the fact the species represents a large flying reptile. The specific name refers to its provenance from South-America.

The holotype, MPCN-PV 0054, has been recovered near the Bajo de Arriagada site, in Patagonia, from a layer of the upper Allen Formation. It consists of a partial rostrum with a preserved length of 264 millimetres. This snout is elongated and transversely compressed. The jaws are toothless. The wingspan has been estimated as at least 5 metres (16.4 ft).

Aerotitan has been assigned to the Azhdarchidae. If correct, this would make it the first unambiguous azhdarchid from South-America.