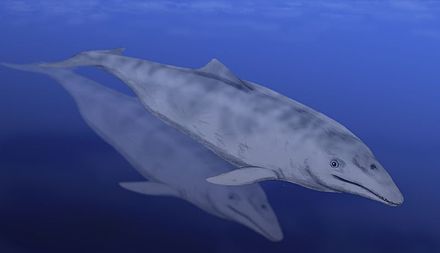 Aetiocetus is a genus of extinct basal mysticete, or baleen whale that lived 33.9 to 23.03 million years ago, in the late Oligocene in the North Pacific ocean, around Japan, Mexico, and Oregon, U.S. It was first described by Douglas Emlong in 1966 and currently contains known four species, A. cotylalveus, A. polydentatus, A. tomitai, and A. weltoni. These whales are remarkable for their retention of teeth and presence of nutrient foramina, indicating that they possessed baleen. Thus, Aetiocetus represents the transition from teeth to baleen in Oligocene mysticetes. Baleen is a highly derived character, or synapomorphy, of mysticetes, and is a keratinous structure that grows from the palate, or roof of the mouth, of the whale. The presence of baleen is inferred from the fossil record in the skull of Aetiocetus. Aetiocetus is known from both sides of the Pacific Ocean: it was first documented in Oregon, United States, but it is also known from Japan and Mexico. The genus is currently constrained to the Northern hemisphere and has little value in biostratigraphic studies of the Oligocene due to its limited occurrences across the Pacific.