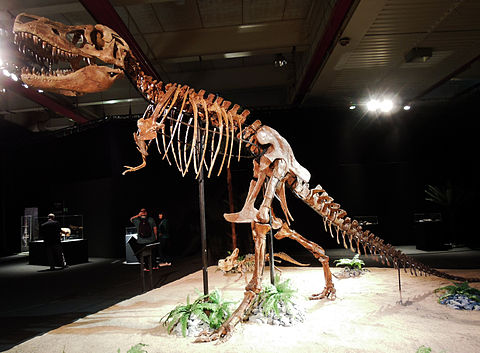 Tarbosaurus ( TAR-ba-SAWR-as; meaning "alarming lizard") is a genus of tyrannosaurid theropod dinosaur that flourished in Asia about 70 million years ago, at the end of the Late Cretaceous Period. Fossils have been recovered in Mongolia, with more fragmentary remains found further afield in parts of China.

Although many species have been named, modern paleontologists recognize only one, T. bataar, as valid. Some experts see this species as an Asian representative of the North American genus Tyrannosaurus; this would make the genus Tarbosaurus redundant. Tarbosaurus and Tyrannosaurus, if not synonymous, are considered to be at least closely related genera. Alioramus, also from Mongolia, is thought by some authorities to be the closest relative of Tarbosaurus.

Like most known tyrannosaurids, Tarbosaurus was a large bipedal predator, weighing up to five tonnes and equipped with about sixty large teeth. It had a unique locking mechanism in its lower jaw and the smallest forelimbs relative to body size of all tyrannosaurids, renowned for their disproportionately tiny, two-fingered forelimbs.

Tarbosaurus lived in a humid floodplain criss-crossed by river channels. In this environment, it was an apex predator at the top of the food chain, probably preying on other large dinosaurs like the hadrosaur Saurolophus or the sauropod Nemegtosaurus. Tarbosaurus is represented by dozens of fossil specimens, including several complete skulls and skeletons. These remains have allowed scientific studies focusing on its phylogeny, skull mechanics, and brain structure.