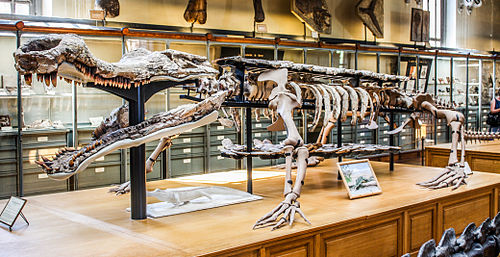 Sarcosuchus (meaning "flesh crocodile") is an extinct genus of crocodyliform and distant relative of living crocodylians that lived 112 million years ago. It dates from the early Cretaceous Period of what is now Africa and South America and is one of the largest crocodile-like reptiles that ever lived. It was almost twice as long as the modern saltwater crocodile and weighed up to 8 tonnes.

The first remains were discovered during several expeditions led by the French paleontologist Albert-Felix de Lapparent, spanning from 1946 to 1959, in the Sahara. These remains were fragments of the skull, vertebrae, teeth and scutes. In 1964, an almost complete skull was found in Niger by the French CEA, but it was not until 1997 and 2000 that most of its anatomy became known to science, when an expedition led by the American paleontologist Paul Sereno discovered six new specimens, including one with about half the skeleton intact and most of the spine.