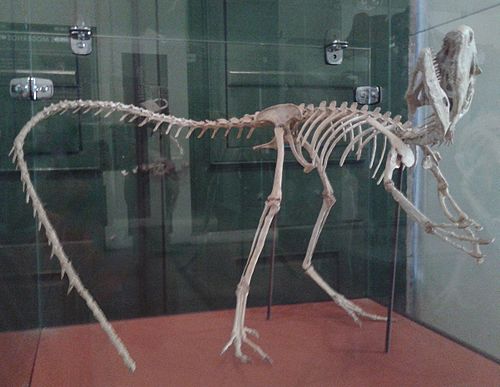 Santanaraptor (meaning "Santana Formation thief") is a genus of theropod dinosaur that lived in South America during the Early Cretaceous (late Aptian-early Albian), about 112 million years ago. It is known from a partial juvenile specimen recovered with fragments of mineralized soft tissue, including muscle and skin tissue, but no trace of the external covering, which was unearthed in 1996 from the Romualdo Group (Santana Formation) in the Ceara State, northeastern Brazil. While primarily known from hindquarter elements, the individual represented by the fossil may have reached 1.25 metres (4.1 ft) in length. The fossil consists of bones from the pelvis, hindlimbs, and tail. These provide little information on its overall appearance. However, it was definitely a coelurosaur, and a few of its details suggest that it might be a member of the tyrannosauroids. It is presumed to be similar to Dilong and Guanlong in that it had long arms, three fingered hands, and slim hindlimbs. Santanaraptor is thought by some paleontologists to be the first tyrannosauroid known from Gondwana.