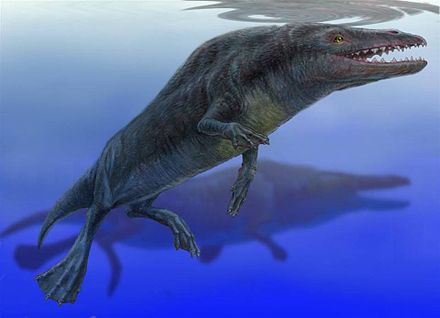 Rodhocetus (from Rodho, the geological anticline at the type locality, and cetus, Latin for whale) is an extinct genus of protocetid early whale known from the Lutetian (48.6 to 40.4 million years ago) of Pakistan. The best-known protocetid, Rodhocetus is known from two partial skeletons that taken together give a complete image of an Eocene whale that had short limbs with long hands and feet that were probably webbed and a sacrum that was immobile with four partially fused sacral vertebrae. It is one of several extinct whale genera that possess land mammal characteristics, thus demonstrating the evolutionary transition from land to sea.