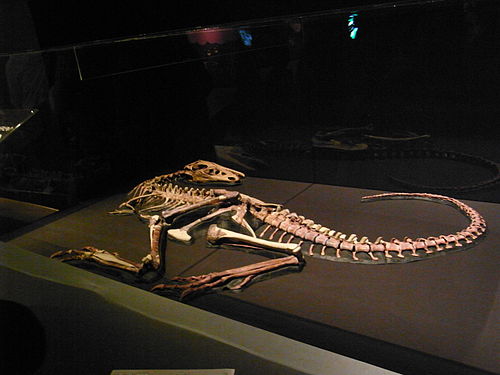 Raptorex is a dubious genus of tyrannosaurid dinosaur. Its fossil remains consist of a single juvenile specimen probably uncovered in Mongolia, or possibly northeastern China. The type species is R. kriegsteini, described in 2009 by Sereno and colleagues. The genus name is derived from Latin raptor, "robber", and rex, "king". The specific name honours Roman Kriegstein, a survivor of the Holocaust, whose son Henry Kriegstein donated the specimen to the University of Chicago for scientific study.

While initially considered to have come from the Yixian Formation of China, dated to approximately 125 million years ago during the early Cretaceous period, later studies showed that such an early date for the fossil are unlikely, and given its extremely close similarity to juvenile tyrannosaurids of the late Cretaceous, it probably came from the Iren Dabasu or similar formation. Because the specimen is a juvenile, and the changes undergone by tyrannosaurids during growth are not yet well understood, many researchers now consider it to be a nomen dubium, because it cannot be confidently paired with an adult skeleton (though it is extremely similar to juvenile Tarbosaurus bataar skeletons of the same size and age).