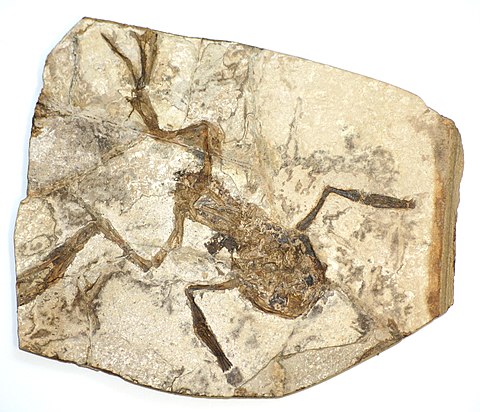 Palaeobatrachus was a primitive frog from Central Europe that existed from the Cretaceous (130 million years ago) to the early Pleistocene period (Gelasian). Although not closely related, it would have superficially resembled the present day African clawed toad Xenopus.

Its skeletal remains are plentiful in freshwater sediments in western Bohemia, in Geiseltal (west Germany) and in east Germany. They are sometimes preserved very well indeed, with impressions of internal organs, muscles, nerves, blood vessels and epidermis, and with traces of coloring. Tadpoles and eggs have also been found.

Palaeobatrachus had a relatively broad skull the shape of a Gothic arch. Its body was relatively large, ranging from 8 to 10 centimetres (3.1 to 3.9 in) in length, and the female was usually larger than the male (sexual dimorphism).

These frogs lived permanently in water. Their bag-shaped lungs, on the dorsal side of their body, enabled them to remain submerged for long periods. They inhabited through-drainage basins or swamps where brown coal deposits were formed. Like the African clawed toad, they probably lived on small crustaceans, insect larvae and small fish and themselves provided sustenance for many other animals.

The climatic change at the beginning of the Pliocene was a real catastrophe for Palaeobatrachus, which required warmth, and, being specialized, was unable to adapt itself to the altered conditions. Water-rich and warm environment that existed in the area of the Netherlands, acting as a refugium for Palaeobatrachus, made it possible for one species (P. eurydices) to survive as recently as the early Pleistocene.