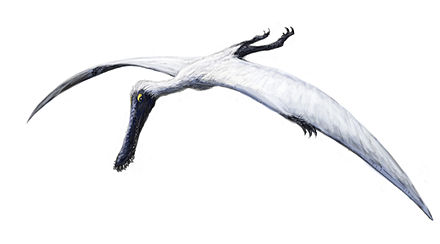 Plataleorhynchus was a genus of ctenochasmatid pterodactyloid pterosaur from the Tithonian-Berriasian-age Upper Jurassic or Lower Cretaceous Purbeck Limestone of Dorset, England.

The genus was named in 1995 by Stafford Howse and Andrew Milner. The type species is Plataleorhynchus streptophorodon. The genus name is derived from Platalea, the spoonbill, and Greek rhynchos, "snout", in reference to the distinctive form of the front of the skull. The specific name is derived from Greek streptophoros, "collared", and odon, "tooth", referring to the tooth form.

It is based on holotype NHML R.11957 (earlier BMNH R.11957), an incomplete anterior upper jaw with teeth found in a chalkstone quarry near Langton Matravers. The fossil is present on a plate; its underside is visible. This jaw is notable because it expands to form a circular, spatula-like shape at the front, holding 22 narrow teeth that point sideways. Forty other teeth (sockets) were present in the preserved remainder of the snout; the total for the upper jaws was estimated at 76.

The authors classified Plataleorhynchus as a member of the Ctenochasmatidae, a group containing many filter feeders. David Unwin in 2005 placed it in the subgroup of the Gnathosaurinae.

Although Plataleorhychus would have been similar in size to large gnathosaurines like Gnathosaurus; its skull length was estimated at a minimum of forty centimetres (15.75 in), the different shape of its spoonbill, presence of an apparently horn-covered pad on the palate, and smaller teeth suggest it did not feed in the same way, perhaps stirring up water-dwelling animals from muddy or weedy environments.