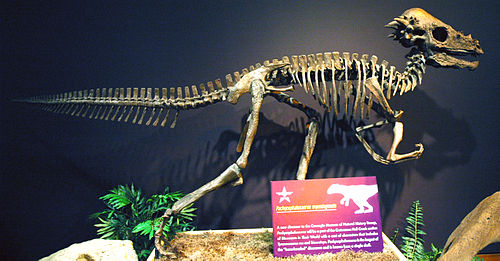 Pachycephalosaurus (meaning "thick-headed lizard," from Greek pachys-/pakhus- "thick", kephale/kephale "head" and sauros/sauros "lizard") is a genus of pachycephalosaurid dinosaurs. The type species, P. wyomingensis, is the only known species. It lived during the Late Cretaceous Period (Maastrichtian stage) of what is now North America. Remains have been excavated in Montana, South Dakota, and Wyoming. It was an herbivorous creature which is primarily known from a single skull and a few extremely thick skull roofs, though more complete fossils have been found in recent years. Pachycephalosaurus was one of the last non-avian dinosaurs before the Cretaceous-Paleogene extinction event. Another dinosaur, Tylosteus of western North America, has been synonymized with Pachycephalosaurus.

The thick skull domes of Pachycephalosaurus and related genera gave rise to the hypothesis that pachycephalosaurs used their skulls in intra-species combat. This hypothesis has been disputed in recent years.