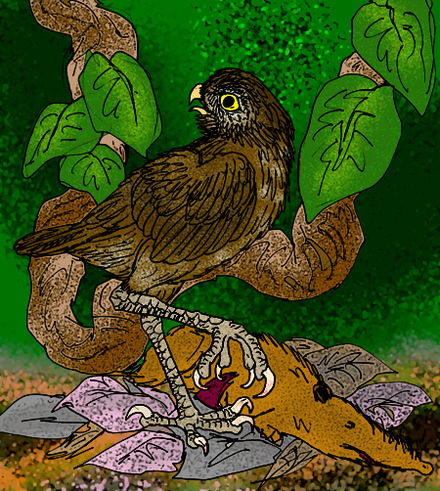 The Cuban giant owl or giant cursorial owl (Ornimegalonyx) is an extinct genus of giant owl that measured 1.1 metres (3 ft 7 in) in height. It is closely related to the many species of living owls of the genus Strix. It was a flightless or nearly flightless bird and it is believed to be the largest owl that ever existed. It lived on the island of Cuba.

The first fossil specimen was mistakenly described as a bird in the family Phorusrhacidae, in part because the bones were so large. In 1961, Pierce Brodkorb reviewed the findings and placed them properly, with the owls. Remains have been abundant throughout the island, in cave deposits from the Late Pleistocene period (126,000 to 11,700 years ago) and at least three nearly complete skeletons have been found.

"Ornimegalonyx arredondoi" is a nomen nudum; the name was proposed for this species before it was described but oteroi was eventually adopted by Oscar Arredondo (according to the rules of the ICZN, naming a species after oneself is not prohibited, but it is frowned upon as vain by the scientific community).