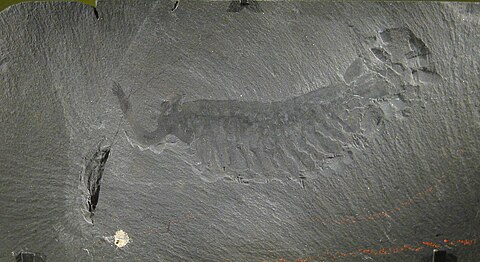 Opabinia regalis is an extinct, stem group arthropod found in the Middle Cambrian Burgess Shale Lagerstatte of British Columbia, Canada. Fewer than twenty good specimens have been described; 3 specimens of Opabinia are known from the Greater Phyllopod bed, where they constitute less than 0.1% of the community. Opabinia was a soft-bodied animal of modest size, and its segmented body had lobes along the sides and a fan-shaped tail. The head shows unusual features: five eyes, a mouth under the head and facing backwards, and a proboscis that probably passed food to the mouth. Opabinia probably lived on the seafloor, using the proboscis to seek out small, soft food.

When the first thorough examination of Opabinia in 1975 revealed its unusual features, it was thought to be unrelated to any known phylum, although possibly related to a hypothetical ancestor of arthropods and of annelid worms. However other finds, most notably Anomalocaris, suggested that it belonged to a group of animals that were closely related to the ancestors of arthropods and of which the living animals onychophorans and tardigrades may also be members.

In the 1970s there was an ongoing debate about whether multi-celled animals appeared suddenly during the Early Cambrian, in an event called the Cambrian explosion, or had arisen earlier but without leaving fossils. At first Opabinia was regarded as strong evidence for the "explosive" hypothesis. Later the discovery of a whole series of similar lobopod animals, some with closer resemblances to arthropods, and the development of the idea of stem groups suggested that the Early Cambrian was a time of relatively fast evolution but one that could be understood without assuming any unique evolutionary processes.