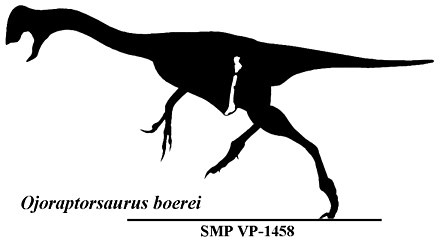 Ojoraptorsaurus is a genus of oviraptorosaurian dinosaur from the late Cretaceous. Ojoraptorsaurus is known from the holotype SMP VP-1458, an incomplete pair of fused pubes found at the Naashoibito Member of the Ojo Alamo Formation dating from the early to the late Maastrichtian, about 69 to 66 million years ago. It was first named by Robert M. Sullivan, Steven E. Jasinski and Mark P.A. van Tomme in 2011 and the type species is Ojoraptorsaurus boerei. The generic name combines a reference to the formation with a Latin raptor, "plunderer", and a Latinised Greek saurus, "lizard". The specific name honours oceanographer Arjan Boere who found the specimen.