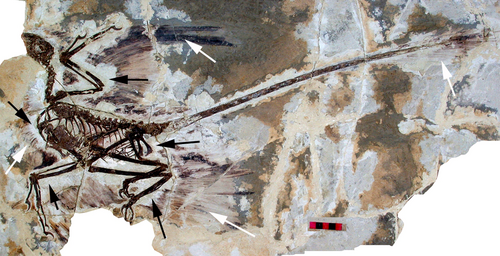 Microraptor (Greek, mikros, mikros: "small"; Latin, raptor: "one who seizes") was a genus of small, four-winged paravian dinosaurs. Numerous well-preserved fossil specimens have been recovered from Liaoning, China. They date from the early Cretaceous Jiufotang Formation (Aptian stage), 120 million years ago. Three species have been named (M. zhaoianus, M. gui, and M. hanqingi), though further study has suggested that all of them represent variation in a single species, which is properly called M. zhaoianus. Cryptovolans, initially described as another four-winged dinosaur, is usually considered to be a synonym of Microraptor.

Like Archaeopteryx, well-preserved fossils of Microraptor provide important evidence about the evolutionary relationship between birds and dinosaurs. Microraptor had long pennaceous feathers that formed aerodynamic surfaces on the arms and tail but also on the legs. This led paleontologist Xu Xing in 2003 to describe the first specimen to preserve this feature as a "four-winged dinosaur" and to speculate that it may have glided using all four limbs for lift. Subsequent studies have suggested that Microraptor was capable of powered flight as well.

Microraptor was among the most abundant non-avialan dinosaurs in its ecosystem, and the genus is represented by more fossils than any other dromaeosaurid, with possibly over 300 fossil specimens represented across various museum collections.