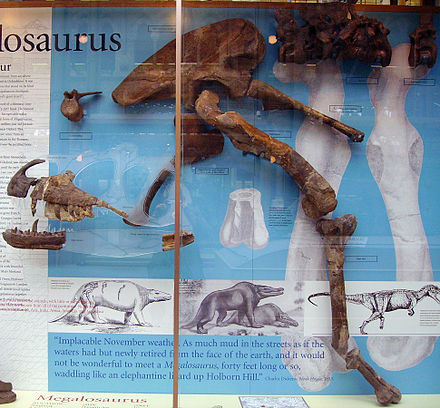 Megalosaurus (meaning "Great Lizard", from Greek megas, megas, meaning 'big', 'tall' or 'great' and sauros, sauros, meaning 'lizard') is a genus of large meat-eating theropod dinosaurs of the Middle Jurassic period (Bathonian stage, 166 million years ago) of Southern England. Although fossils from other areas have been assigned to the genus, the only certain remains of Megalosaurus come from Oxfordshire and date to the late Middle Jurassic.

The earliest possible fossils of the genus came from the Taynton Limestone Formation. One of these was the lower part of a femur, discovered in the 17th century. It was originally described by Robert Plot as a thighbone of a Roman war elephant, and then as a biblical giant. The first scientific name given for it, in the 18th century, was Scrotum humanum, created by Richard Brookes as a caption; however, this is not considered valid today.

Megalosaurus was, in 1824, the first genus of non-avian dinosaur to be validly named. The type species is Megalosaurus bucklandii, named in 1827. In 1842, Megalosaurus was one of three genera on which Richard Owen based his Dinosauria. On Owen's directions a model was made as one of the Crystal Palace Dinosaurs, which greatly increased the public interest for prehistoric reptiles. Subsequently, over fifty other species would be classified under the genus, originally because dinosaurs were not well known, but even during the 20th century after many dinosaurs had been discovered. Today it is understood these additional species were not directly related to M. bucklandii, which is the only true Megalosaurus species. Because a complete skeleton of it has never been found, much is still unclear about its build.

The first naturalists who investigated Megalosaurus mistook it for a gigantic lizard of twenty metres length. In 1842, Owen concluded that it was no longer than nine metres, standing on upright legs. He still thought it was a quadruped, though. Modern scientists, by comparing Megalosaurus with its direct relatives in the Megalosauridae, were able to obtain a more accurate picture. Megalosaurus was about seven metres long, weighing about 1.1 tonnes. It was bipedal, walking on stout hindlimbs, its horizontal torso balanced by a horizontal tail. Its forelimbs were short, though very robust. Megalosaurus had a rather large head, equipped with long curved teeth. It was generally a robust and heavily muscled animal.