MAHAKALA
(mah-ha-kah-la)
meaning: "Named after one of the eight protector deities in Tibetan Buddhism" 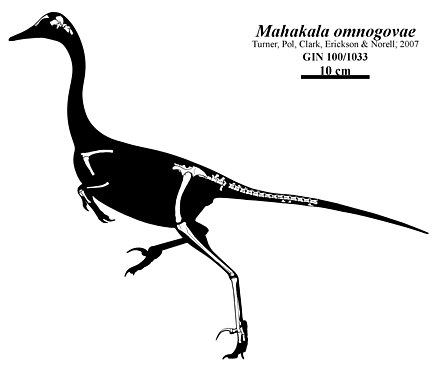 Mahakala (from Sanskrit, named for Mahakala, one of eight protector deities (dharmapalas) in Tibetan Buddhism) is a genus of basal dromaeosaurid dinosaur from the Campanian-age (about 80 million years ago) Upper Cretaceous Djadokhta Formation of Omnogovi, Mongolia. It is based on a partial skeleton found in the Gobi Desert. Mahakala was a small dromaeosaurid (approximately 70 centimeters long (28 in)), and its skeleton shows features that are also found in early troodontids and avialans. Despite its late appearance, it is among the most basal dromaeosaurids. Its small size, and the small size of other basal deinonychosaurians, suggests that small size appeared before flight capability in birds.