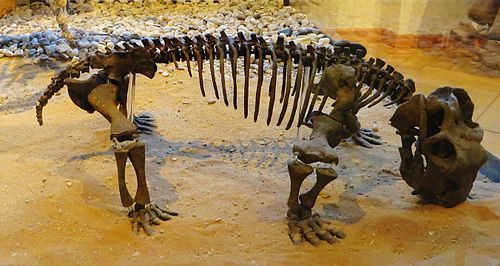 Lystrosaurus ("shovel lizard") is a herbivorous genus of Late Permian and Early Triassic Period dicynodont therapsids, which lived around 250 million years ago in what is now Antarctica, India, and South Africa. Four to six species are currently recognized, although from the 1930s to 1970s the number of species was thought to be much higher. They ranged in size from a small dog to 2.5 meters long.

Lystrosaurus was by far the most common terrestrial vertebrate of the Early Triassic, accounting for as many as 95% of the total individuals in some fossil beds. It has often been suggested that it had anatomical features that enabled it to adapt better than most animals to the atmospheric conditions that were created by the Permian-Triassic extinction event and which persisted through the Early Triassic--low concentrations of oxygen and high concentrations of carbon dioxide. However, recent research suggests that these features were no more pronounced in Lystrosaurus than in genera that perished in the extinction or in genera that survived but were much less abundant than Lystrosaurus.