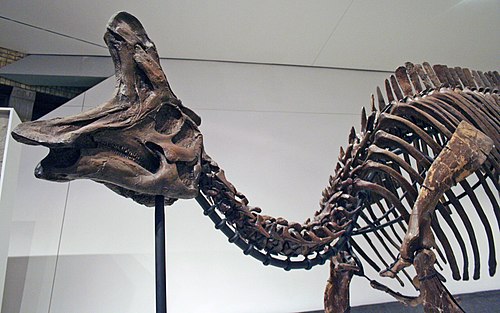 Lambeosaurus ( LAM-bee-o-SAWR-as; meaning "Lambe's lizard") is a genus of hadrosaurid dinosaur that lived about 75 million years ago, in the Late Cretaceous period (Campanian) of North America. This bipedal/quadrupedal, herbivorous dinosaur is known for its distinctive hollow cranial crest, which in the best-known species resembled a hatchet. Several possible species have been named, from Canada, the United States, and Mexico, but only the two Canadian species are currently recognized as valid.

Lambeosaurus was belatedly described in 1923 by William Parks, over twenty years after the first material was studied by Lawrence Lambe. The genus has a complicated taxonomic history, in part because small-bodied crested hadrosaurids now recognized as juveniles were once thought to belong to their own genera and species. Currently, the various skulls assigned to the type species L. lambei are interpreted as showing age differences and sexual dimorphism. Lambeosaurus was closely related to the better known Corythosaurus, which is found in slightly older rocks, as well as the less well-known genera Hypacrosaurus and Olorotitan. All had unusual crests, which are now generally assumed to have served social functions like noisemaking and recognition.