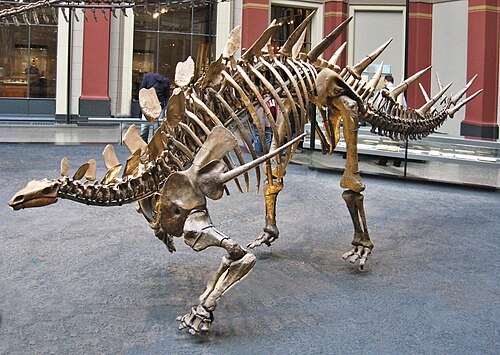 Kentrosaurus ( KEN-tro-SAWR-as) is a genus of stegosaurian dinosaur from the Late Jurassic of Tanzania. The type species is K. aethiopicus, named and described by German palaeontologist Edwin Hennig in 1915. Often thought to be a "primitive" member of the Stegosauria, several recent cladistic analyses find it as more derived than many other stegosaurs, and a close relative of Stegosaurus from the North American Morrison Formation within the Stegosauridae.

Fossils of K. aethiopicus have been found only in the Tendaguru Formation, dated to the late Kimmeridgian and early Tithonian ages, about 152 million years ago. Hundreds of bones were unearthed by German expeditions to German East Africa between 1909 and 1912. Although no complete skeletons are known, the remains provided a nearly complete picture of the build of the animal.

Kentrosaurus generally measured around 4.5 metres (15 ft) in length as an adult, and weighed about one tonne (1.1 tons). It walked on all fours with straight hindlimbs. It had a small, elongated head with a beak used to bite off plant material that would be digested in a large gut. It had a, probably double, row of small plates running down its neck and back. These plates gradually merged into spikes on the hip and tail. The longest spikes were on the tail end and were used to actively defend the animal. There also was a long spine on each shoulder. The thigh bones come in two different types, suggesting that one sex was larger and more stout than the other.