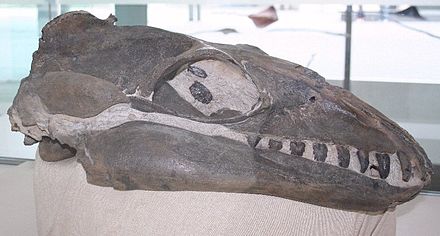 Janjucetus ("jan-ju-see-tus", from the Jan Juc township near the type locality, and cetus, Latin for whale) is an extinct genus of whale, and a basal form of the Mysticeti, a clade which includes the extant baleen whales. The only known species, Janjucetus hunderi, lived during the late Oligocene, about 25 million years ago in coastal seas off southeast Australia. Unlike modern mysticetes, it possessed large teeth for gripping and shredding prey, and lacked baleen. Janjucetus was likely to have been a raptorial predator that captured large single prey animals rather than bulk-feeding on small organisms in the manner of living baleen whales.