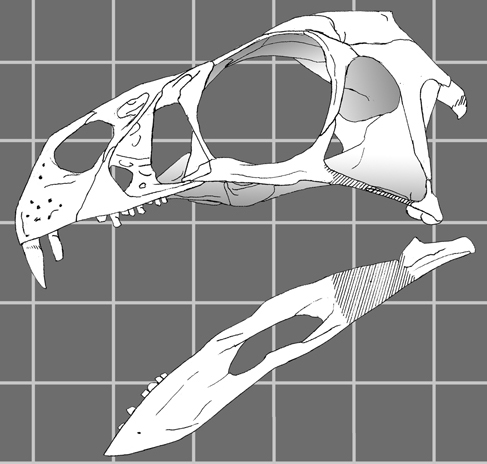 Incisivosaurus ("incisor lizard") is a genus of small, probably herbivorous theropod dinosaur from the early Cretaceous Period of what is now the People's Republic of China. The first specimen to be described (by Xu et al. in 2002), IVPP V13326, is a skull that was collected from the lowermost levels (the fluvial Lujiatun beds) of the Yixian Formation (dating to the Barremian stage about 125 million years ago) in the Sihetun area, near Beipiao City, in western Liaoning Province. The most significant, and highly unusual, characteristic of this dinosaur is its apparent adaptation to an herbivorous or omnivorous lifestyle. It was named for its prominent, rodent-like front teeth, which show wear patterns commonly found in plant-eating dinosaurs. The specific name gauthieri honors Dr. Jacques Gauthier, a pioneer of the phylogenetic method of classification.