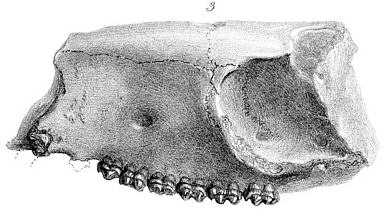 Hyracotherium ( HY-rak-o-THEER-ee-am; "hyrax-like beast") is an extinct genus of very small (about 60 cm in length) perissodactyl ungulates that was found in the London Clay formation. This small, dog-sized animal was once considered to be the earliest known member of Equidae before the type species, H. leporinum, was reclassified as a palaeothere, a perissodactyl family basal to both horses and brontotheres. The remaining species are now thought to belong to different genera, such as Eohippus, which had previously been synonymised with Hyracotherium.