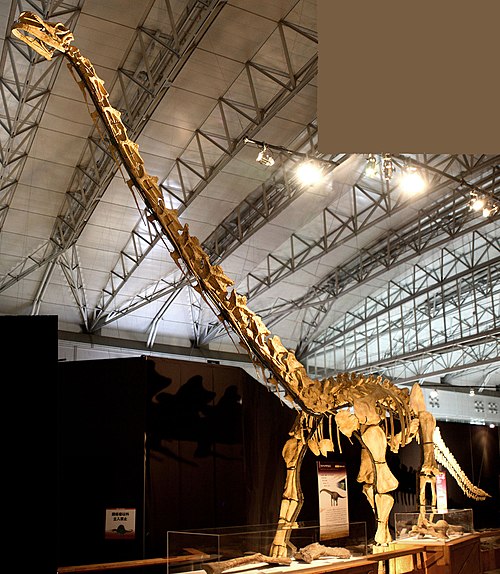 Huabeisaurus (, meaning "North China lizard") was a genus of dinosaur from the Late Cretaceous (Cenomanian to Campanian stages, around 99.7-70.6 million years ago). It was a sauropod which lived in what is present-day northern China. The type species, Huabeisaurus allocotus, was first described by Pang Qiqing and Cheng Zhengwu in 2000. Huabeisaurus is known from numerous remains found in the 1990s, which include teeth, partial limbs and vertebrae. Due to its relative completeness, Huabeisaurus represents a significant taxon for understanding sauropod evolution in Asia. Huabeisaurus comes from Kangdailiang and Houyu, Zhaojiagou Town, Tianzhen County, Shanxi province, China. The holotype was found in the unnamed upper member of the Huiquanpu Formation, which is Late Cretaceous (?Cenomanian-?Campanian) in age based on ostracods, charophytes, and fission-track dating.

Huabeisaurus measures 20 metres (66 ft) long and 5 metres (16 ft) high, as estimated by Pang and Cheng in 2000. It would have been a quadrupedal herbivore with a long neck and tail, like most other sauropods. The skeleton has been presumed to have belonged to an almost mature individual, because it lacks sutures on vertebrae, but not on pelvic material. A set of 12 characters were identified by D'Emic et al. in 2013 that differentiate Huabeisaurus from other sauropods.

An isolated humerus, designated the paratype by Pang and Cheng, comes from a locality over 200 meters away from the type locality of Huabeisaurus, in a fluvially deposited sandy conglomeratic layer in the lower member of the Huiquanpu Formation. This layer is roughly 90 m lower stratigraphically than the type horizon of Huabeisaurus, which comes from the upper member of the Huiquanpu Formation. The humerus thus comes from a stratum representing a different and likely older depositional environment than that of Huabeisaurus, and does not overlap anatomically with the holotypic skeleton, and so cannot currently be referred it.

The discoverers erected a new family for the genus, Huabeisauridae, although this family name is not widely used amongst paleontologists. Recently, the family was again proposed, this time by D'Emic et al. because Euhelopodidae, which Huabeisaurus has been assigned to most recently, might have to be split into smaller clades throughout Somphospondyla because of all the taxa assigned to it.

Pang and Cheng tentatively suggested that "Titanosaurus" falloti be referred to Huabeisaurus. One problem, however, is that the femora of Huabeisaurus and "T." falloti differ in the bevel of the distal end versus the long axis of the bone, so the two cannot represent the same genus.