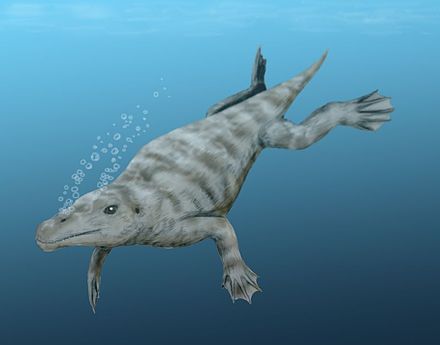 Georgiacetus is an extinct genus of ancient whale known from the Eocene period of the United States. Fossils are known from Georgia, Alabama, and Mississippi and protocetid fossils from the right time frame, but not yet confirmed as Georgiacetus, have been found in Texas (Kellogg 1936) and South Carolina (Albright 1996).

Uhen 2008 created a new clade, Pelagiceti, for the common ancestor of Basilosauridae and all of its descendants, including Neoceti, the living cetaceans. He placed Georgiacetus near the base of this clade together with Eocetus and perhaps Babiacetus because of the assumed presence of a fluke and very compressed posterior caudal vertebrae in these genera.

Georgiacetus is an extinct protocetid (early whale) which lived about 40 million years ago and hunted the rich, Suwannee Current powered coastal sea which once covered the Southeastern United States. This was during the earliest Bartonian Stage of the Eocene Epoch (40.5 to 37.2 million years ago). Current research puts Georgiacetus as the link between the protocetids and modern whales, making the Georgia whale a scientifically important ancestor to all modern whales. An articulated and completed cast of the find is currently on display at the Georgia Southern University Museum in Statesboro, Georgia; Georgia Southern University also houses the actual 1983 Georgiacetus fossils and has the animal's fossilized hip bones on display.