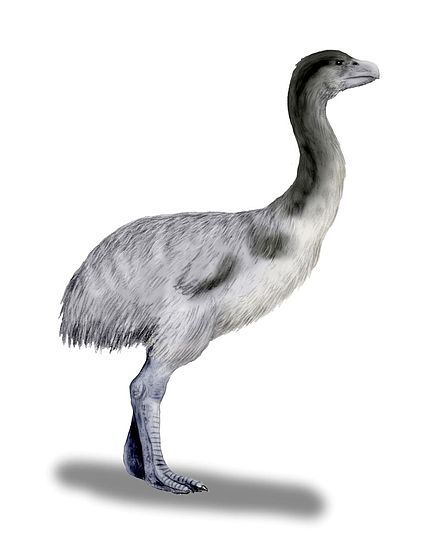 Genyornis newtoni was a large, flightless bird that lived in Australia. Over two metres in height, they were likely either omnivorous or herbivorous. They became extinct 30+-5 thousand years ago. Many other species became extinct in Australia around that time, coinciding with the arrival of humans. Their closest living relatives are fowl.

Two main theories propose a cause for megafauna extinction - human impact and climate change. A study has been performed in which more than 700 Genyornis eggshell fragments were dated. Through this, it was determined that Genyornis declined and became extinct over a short period--too short for it to be plausibly explained by climate change. The authors considered this to be a very good indication that the entire mass extinction event in Australia was due to human activity, rather than climate change. A 2015 study collected egg shell fragments of Genyornis from around 200 sites that show burn marks. Analysis of amino acids in the egg shells showed a thermal gradient consistent with the egg being placed on an ember fire. The egg shells were dated to between 53.9 and 43.4 thousand years before present, suggesting that humans were collecting and cooking Genyornis eggs in the thousands of years before their extinction. A later study, however, suggests that the eggs actually belogned to Progura, a genus of giant megapodes.

In May 2010, archaeologists announced the rediscovery of an Aboriginal rock art painting, possibly 40,000 years old, at the Nawarla Gabarnmung rock art site in the Northern Territory, that depicts two of the birds in detail. Late survival of Genyornis in temperate south west Victoria has also recently been suggested, based on dateable Aboriginal traditions.