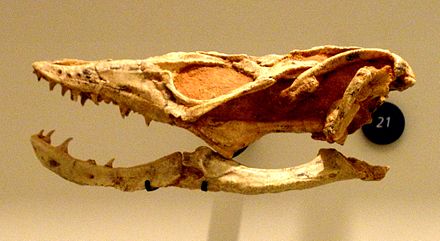 Estesia (in honour of Richard Estes) is an extinct genus of Late Cretaceous helodermatoid lizard found in the Gobi Desert in Mongolia. It was discovered in June 1990 by a joint expedition made up of Mongolian and American palaeontologists, and described in 1992 by Mark Norell, Malcolm McKenna and Michael Novacek. This animal is very interesting, not only because it's close to the lineage of modern Gila monsters (Heloderma), but also because its dentition shows evidence that it was venomous.

The type species is E. mongoliensis, after Mongolia, where it was found.