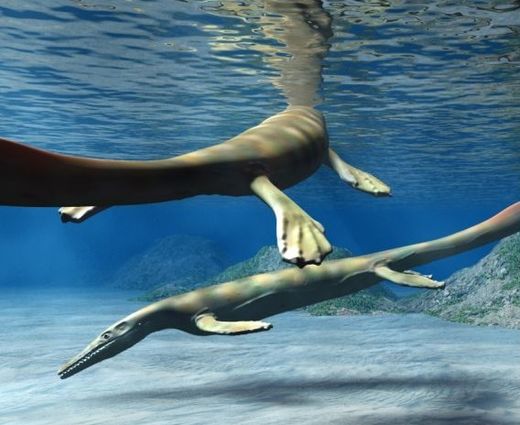 Eonatator is an extinct genus of marine lizard belonging to the mosasaur family. It is a close relative of Halisaurus, and part of the same subfamily, the Halisaurinae. It is known from the Upper Cretaceous of North America, South America and Europe. Originally, this taxon was included within Halisaurus, but was placed in its own genus, which also lead to the subfamily Halisaurinae being created for the two genera.

Eonatator is known from the Smoky Hill Chalk Member of the Niobrara Chalk Formation (Upper Coniacian - Lower Campanian) of Kansas, from the Eutaw Formation (Santonian) and Mooreville Chalk Formation (Selma Group; Santonian-Lower Campanian) of Alabama (United States), from the Kristianstad Basin of southern Sweden (late early Campanian), and the unit Nivel de Lutitas y Arenas (Campanian) in La Mesa, Colombia. The name Eonatator means "dawn swimmer" (Greek eos = dawn + Latin natator = swimmer). Originally it contained only a single species, E. sternbergii. The species is named in honour of Charles H. Sternberg and his son, Levi, who discovered the type specimen in the Niobrara Chalk during the summer of 1918. A second species, E. coellensis, was named for the town of Coello in the Department of Tolima in Colombia, near of which it was discovered.