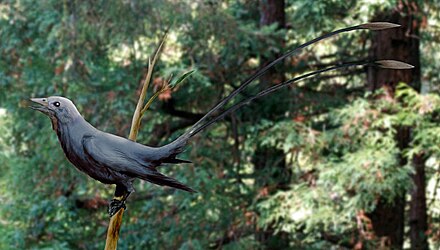 Eoconfuciusornis a genus of extinct bird that lived 131 Ma ago, in the Early Cretaceous of China.

The type species of Eoconfuciusornis, Eoconfuciusornis zhengi, was named and described by Zhang Fucheng, Zhou Zhonghe and Michael Benton in 2008. The generic name combines a Greek eos, eos, "dawn", with the name of the related genus Confuciusornis. The specific name honours Zheng Guangmei.

The holotype, specimen IVPP V11977, was found near Sichakou in Fengning in Hebei province. Its provenance the Sichakou Beds are part of the Dabeigou Formation which was seen by the describers as dating to the Hauterivian, and were thought to be about 131 million years old. The specimen consists of a compressed skeleton that is relatively complete and shows well conserved remains of most of the feathering.

Eoconfuciusornis was somewhat smaller than Confuciusornis, but otherwise very similar with a pointed toothless beak. Compared to the latter it had longer legs and lacked a pierced deltopectoral crest on the humerus.

Eoconfuciusornis was assigned to the Confuciusornithidae. It would have been the most basal species known of that group, as reflected by the generic name and in conformation to the age ascribed to it, about six million years older than the specimens of Confuciusornis.