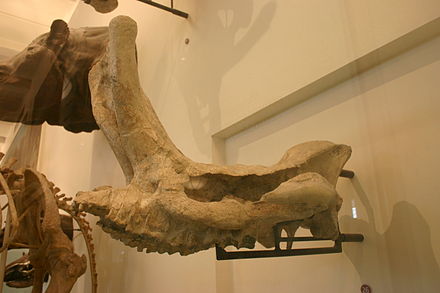 Embolotherium (Greek embole, embole + therion, therion "battering ram beast", or "wedge beast") is an extinct genus of brontothere that lived in Mongolia during the late Eocene period. It is most easily recognized by a large bony protuberance emanating from the anterior (front) end of the skull. This process resembles a battering ram, thus providing the reason for the name Embolotherium. The animal is known from about 12 skulls, several jaws, and a variety of other skeletal elements from the Ulan Gochu formation of Inner Mongolia and the Irgilin Dzo of Outer Mongolia.