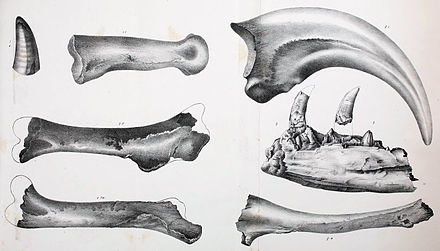 Dryptosaurus ( DRIP-toh-SAW-ras) is a genus of primitive tyrannosauroid that lived approximately 67 million years ago during the latter part of the Cretaceous period in what is now Eastern North America. Dryptosaurus was a large, bipedal, ground-dwelling carnivore, that could grow up to 7.5 m (24.6 ft) long. Although largely unknown now outside of academic circles, a famous painting of the genus by Charles R. Knight made it one of the more widely known dinosaurs of its time, in spite of its poor fossil record. First described by Edward Drinker Cope in 1866 and later renamed by Othniel C. Marsh in 1877, Dryptosaurus is among the first theropod dinosaurs known to science.