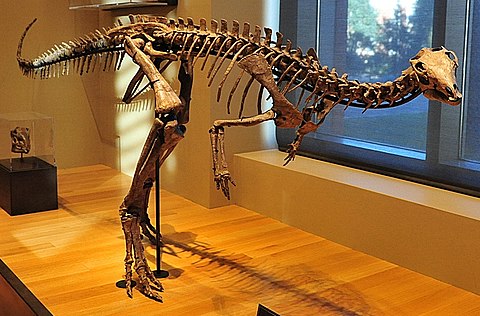 Dryosaurus ( DRY-o-SAWR-as; meaning 'tree lizard', Greek drus/drys meaning 'tree, oak' and sauros/sauros meaning 'lizard'; the name reflects the forested habitat, not a vague oak-leaf shape of its cheek teeth as is sometimes assumed) is a genus of an ornithopod dinosaur that lived in the Late Jurassic period. It was an iguanodont (formerly classified as a hypsilophodont). Fossils have been found in the western United States (and supposedly the Marnes de Bleville locality in Europe), and were first discovered in the late 19th century. Valdosaurus canaliculatus and Dysalotosaurus lettowvorbecki were both formerly considered to represent species of Dryosaurus.