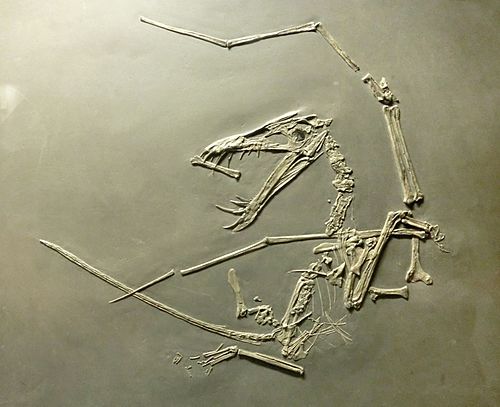 Dorygnathus ("spear jaw") was a genus of pterosaur that lived in Europe during the Early Jurassic period, 180 million years ago when shallow seas flooded much of the continent. It had a short 1.5 meters (4.9 feet) wingspan, and a relatively small triangular sternum, which is where its flight muscles attached. Its skull was long and its eye sockets were the largest opening therein. Large curved fangs that "intermeshed" when the jaws closed featured prominently at the front of the snout while smaller, straighter teeth lined the back. Having variable teeth, a condition called heterodonty, is rare in modern reptiles but more common in primitive pterosaurs. The heterodont dentition in Dorygnathus is consistent with a piscivorous (fish-eating) diet. The fifth digit on the hindlimbs of Dorygnathus was unusually long and oriented to the side. Its function is not certain, but the toe may have supported a membrane like those supported by its wing-fingers and pteroids. Dorygnathus was according to David Unwin related to the Late Jurassic pterosaur, Rhamphorhynchus and was a contemporary of Campylognathoides in Holzmaden and Ohmden.