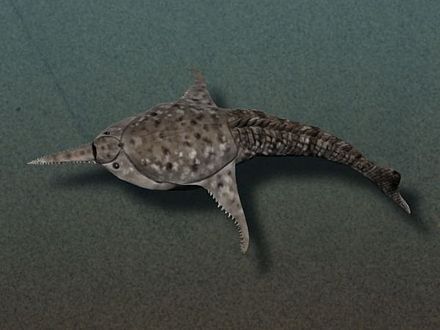 Doryaspis ("Dart Shield") (also known by its synonym, "Lyktaspis") is an extinct genus of primitive jawless fish that lived in the Devonian period. Fossils have been discovered in Spitsbergen.

The animals had a canteen-shaped body armor, and had large branchial plates that extended out and curved downward in a triangular shape, very similar to those of the pycnosteids. An element of the median oral plates (that would correspond to the lower lip or chin in gnathostomes) extends out in a long rod-shaped appendage, called the "pseudorostrum." The tail is long and slender, and has large rows of thick scales.

In the type species, D. nathorsti, the lateral edges of the branchial plates and of the pseudorostrum are serrated. The second species, D. arctica, is smaller, and lacks serrated edges.