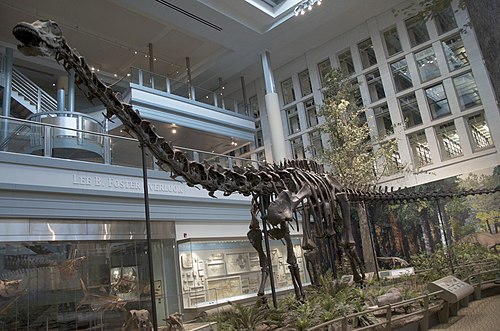 Diplodocus (, , or ) is an extinct genus of diplodocid sauropod dinosaurs whose fossils were first discovered in 1877 by S. W. Williston. The generic name, coined by Othniel Charles Marsh in 1878, is a neo-Latin term derived from Greek diplos (diplos) "double" and dokos (dokos) "beam", in reference to its double-beamed chevron bones located in the underside of the tail. Chevron bones of this particular form were initially believed to be unique to Diplodocus; since then they have been discovered in other members of the diplodocid family as well as in nondiplodocid sauropods, such as Mamenchisaurus. It is now common scientific opinion that Seismosaurus hallorum is a species of Diplodocus.

This genus of dinosaurs lived in what is now mid-western North America at the end of the Jurassic period. Diplodocus is one of the more common dinosaur fossils found in the middle to upper Morrison Formation, between about 154 and 152 million years ago, during the late Kimmeridgian age. The Morrison Formation records an environment and time dominated by gigantic sauropod dinosaurs, such as Apatosaurus, Barosaurus, Brachiosaurus, Brontosaurus, and Camarasaurus.

Diplodocus is among the most easily identifiable dinosaurs, with its typical sauropod shape, long neck and tail, and four sturdy legs. For many years, it was the longest dinosaur known. Its great size may have been a deterrent to the predators Allosaurus and Ceratosaurus: their remains have been found in the same strata, which suggests that they coexisted with Diplodocus.