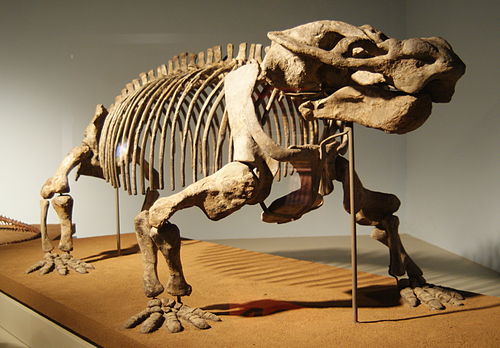 Aulacephalodon is an extinct genus of medium-sized dicynodont, or non-mammalian synapsid, that lived during Permian period, about 299-252 million years ago. Individuals of Aulacephalodon are commonly found in the Lower Beaufort Group of the Karoo Supergroup of South Africa and Zambia. Rising to dominance during the Late Permian, Aulacephalodon were the dominant terrestrial vertebrate herbivores until they became extinct during the Triassic. No living relatives of Aulacephalodon exist today. Two species have been named, the type species, A. baini, and a second species, A. peavoti. However, debate exists among paleontologists if A. peavoti is a true member of the genus Aulacephalodon. Therefore, a majority of the information known about Aulacephalodon is in reference to discoveries about A. baini.

Aulacephalodon belong to the family Geikiidae, a family of dicynodonts generally characterized by their short, broad skulls and large nasal bosses. Two autamorphies used to define Geikiidae include (1) the posterior portion of the zygomatic arch thickened and/or downturned; (2) the labial fossa present. Both features are found in Aulacephalodon and allow for suggestions to be made about possible sexual dimorphism evident in A. baini.

Among certain anomodont therapsids, Aulacephalodon and Pelanomodon are distinguished from their related genera, Oudenodon and Rhachiocephalus by the specialization of their biting mechanism and the relative size of their nasal and prefrontal bosses. Aulacephalodon and Pelanomodon bit using the transverse anterior tips of the jaws, while Oudenodon and Rhachiocephalus bit using the sides of their horn covered jaws. The difference in jaw morphology between the two groups of genera is a notable dichotomy among these related therapsids. Aulacephalodon was unique among dicynodonts and its related therapsids because members of this genus were one of the only dicynodonts to possess canine tusks.