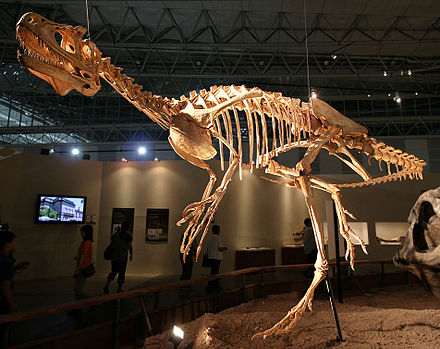 Deltadromeus (meaning "delta runner") is a genus of large theropod dinosaur from Northern Africa. It had long, unusually slender hind limbs for its size, suggesting that it was a swift runner. The skull is not known. One fossil specimen of a single species (D. agilis, or "agile delta runner") has been described, found in the Kem Kem Beds, which date to the mid Cretaceous Period (mid Cenomanian age), about 95 million years ago. It may be a junior synonym of the contemporary Bahariasaurus. Often thought to be a ceratosaurian, the discovery of the theropod Gualicho shinyae indicates it is likely a sister taxon to the South American predator.