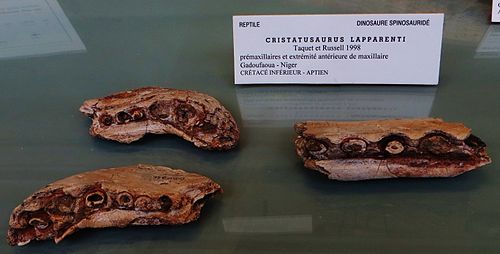 Cristatusaurus (meaning "Crested reptile") is an extinct genus of spinosaurid theropod dinosaur. It lived during the Early Cretaceous Period of what is now West Africa.

Its fossils were found by Philippe Taquet at Gadoufaoua in Niger in 1973. These fossils are quite similar to those of Baryonyx and Suchomimus. The type species, Cristatusaurus lapparenti, was formally described by Taquet and Dale Russell, in 1998. The generic name refers to a crest, crista in Latin, on the snout. The specific name honours the late Albert-Felix de Lapparent.

There is some debate over the identity of this creature, in that some argue that it is probably the same dinosaur as Suchomimus, which has also been found in Niger, in the same layers. In that case the name Cristatusaurus would have priority. Other have concluded, however, that Cristatusaurus is a nomen dubium, considering it indistinguishable from both Suchomimus and Baryonyx.