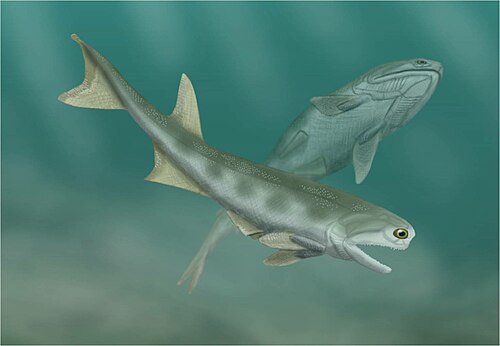 Cheirolepis ('hand fin') is an extinct genus of ray-finned fish that lived in the Devonian period of Europe and North America. It is the only genus yet known within the family Cheirolepidae and the order Cheirolepiformes. It was among the most basal of the Devonian actinopterygians and is considered the first to possess the "standard" dermal cranial bones seen in later actinopterygians.

Cheirolepis was a predatory freshwater fish about 55 centimetres (22 in) long. It had a streamlined body with small, triangular ganoid scales similar to those of the Acanthodii. Cheirolepis had well-developed fins which gave it speed and stability, and was probably an active predator. Based on the size of its eyes, it hunted by sight. Cheirolepis's jaws, lined with sharp teeth, could be opened very wide, allowing it to swallow prey two thirds of its own size.