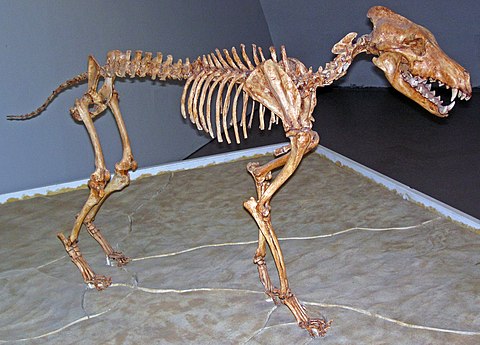 The dire wolf (Canis dirus, "fearsome dog") is an extinct species of the genus Canis. It is one of the most famous prehistoric carnivores in North America, along with its extinct competitor, the sabre-toothed cat Smilodon fatalis. The dire wolf lived in the Americas during the Late Pleistocene epoch (125,000-10,000 years ago). The species was named in 1858, four years after the first specimen had been found. Two subspecies are recognized, these being Canis dirus guildayi and Canis dirus dirus. The dire wolf probably evolved from Armbruster's wolf (Canis armbrusteri) in North America. The largest collection of its fossils has been obtained from the Rancho La Brea Tar Pits in Los Angeles.

Dire wolf remains have been found across a broad range of habitats including the plains, grasslands, and some forested mountain areas of North America, and in the arid savannah of South America. The sites range in elevation from sea level to 2,255 meters (7,400 ft). Dire wolf fossils have rarely been found north of 42degN latitude, with five unconfirmed reports above this latitude. This range restriction is thought to be due to temperature, prey, or habitat limitations imposed by proximity to the Laurentide and Cordilleran ice sheets that existed at the time.

The dire wolf was about the same size as the largest modern gray wolves (Canis lupus), which are the Yukon wolf and the northwestern wolf. C. d. guildayi weighed on average 60 kilograms (132 lb) and C. d. dirus was on average 68 kg (150 lb). Its skull and dentition matched those of C. lupus, but its teeth were larger with greater shearing ability, and its bite force at the canine tooth was the strongest of any known Canis species. These characteristics are thought to be adaptations for preying on Late Pleistocene megaherbivores, and in North America its prey are known to have included horses, ground sloths, mastodons, bison, and camels. As with other large Canis hypercarnivores today, the dire wolf is thought to have been a pack hunter. Its extinction occurred during the Quaternary extinction event along with most of the American megafauna of the time, including a number of other carnivores, that occurred soon after the appearance of humans in the New World. Its reliance on megaherbivores has been proposed as the cause of its extinction, along with climate change and competition with other species, but the cause remains controversial. Dire wolves lived as recently as 9,440 years ago, according to dated remains.