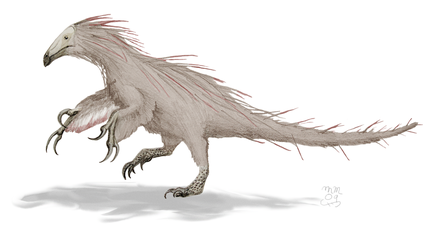 Beipiaosaurus is a genus of therizinosauroid theropod dinosaur from the Early Cretaceous of China. Before the discovery of Yutyrannus, it was among the largest dinosaurs known from direct evidence to be feathered.

The exact classification of therizinosaurs had in the past been hotly debated, since their prosauropod-like teeth and body structure indicate that they were generally herbivorous, unlike typical theropods. Beipiaosaurus, being considered to be a primitive therizinosauroid, has features which suggest that all therizinosauroids, including the more derived Therizinosauridae, to be coelurosaurian theropods, not sauropodomorph or ornithischian relatives as once believed.