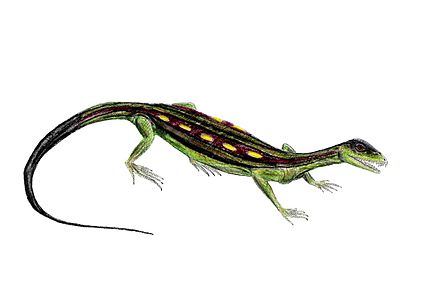 Araeoscelis is an extinct genus of reptile, and one of the earliest diapsids. Fossils have been found in the United States, dating from the early Permian period.

Araeoscelis was around 60 centimetres (2.0 ft) long, and superficially resembled a modern lizard. It differed from earlier forms, such as Petrolacosaurus, in that its teeth were larger and blunter; possibly they were used for cracking insect carapaces.

Unlike its close relatives, which exhibit the two pairs of skull openings characteristic of diapsids, in Araeoscelis the lower pair of temporal fenestrae were closed with bone, resulting in an euryapsid condition. This would have made the skull more solid, presumably allowing a more powerful bite.